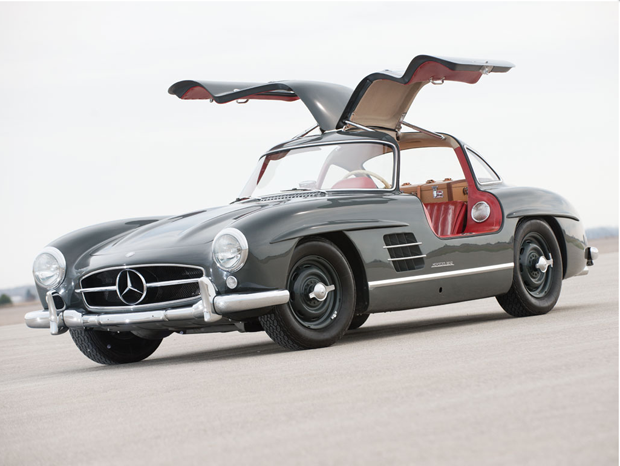 Possibly the most iconic Mercedes-Benz ever to drive out the factory and my personal favorite is the Mercedes-Benz 300SL Gullwing.

First coming off the production line in 1954 the Mercedes-Benz 300SL Gullwing was the very first of a long line of successful SL Mercedes, SL standing for ‘Sport Leicht’ or Sport Light and was built until 1963 with a total of 3,258 built.

Boasting an impressive motorsport pedigree to the 300SL Gullwing scored overall wins at the 1952 Le Mans 24 hours, and came in second and fourth in its first race at the Mille Miglia in the same year.

With it’s 3 liter engine (hence the ‘300’) the 300SL Gullwing boasted an impressive 212 bhp, with a 4-speed manual gear box and SOHC (Single overhead Camshaft), the 300SL is now one of the most collectable Mercedes-Benz cars of all time, with values upwards of $1million. Originally costing $11,000 in the US that’s one hell of a return!

Why put a bid in for this 300SL currently up for Auction!