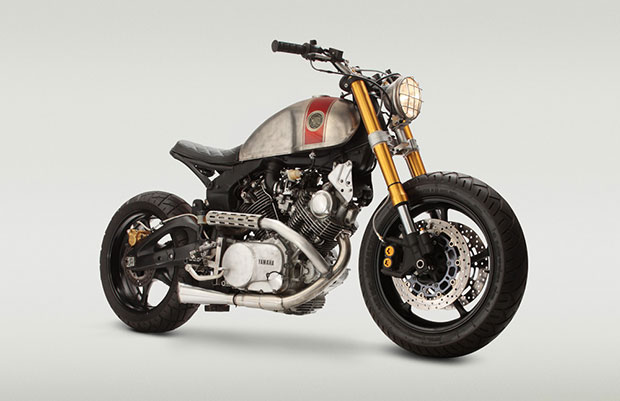 Bike builder John Rylan from Classified Moto in Virginia designed this gorgeous 1982 Yamaha XV920R after a short conversation with an old friend, Bob Ranew, about a movie that they had both seen called “Reciprocity”. The bike in that movie was pretty impressive, having been custom designed for the movie’s director, Sunny Zhao. Bob and John were immediately inspired to create their own uniquely stimulating vision.

They began with a classic and almost pristine 1982 Yamaha XV920R. After a great deal of pain and suffering, both the front and rear ends were swapped out with Yamaha substitutes. The front got the YZ YZF R6-R and the rear was transformed by the R6-S. Custom designed front sprockets were fabricated by Richmond’s Maxum Machine, used to manage the increased offset between the rear wheel and sprocket.

Lots of the 1980’s styled embellishments were stripped off, and huge 188mm tires were added to create the now trim, although powerful, look.

The major area of discussion was regarding the top mounted hooligan bars, but it is hard to imagine this beautiful machine with any other design. Current owner Ranew says that riding this Yamaha XV920R makes you feel like G.I. Joe on an experimental assault bike. It’s all fun and power!