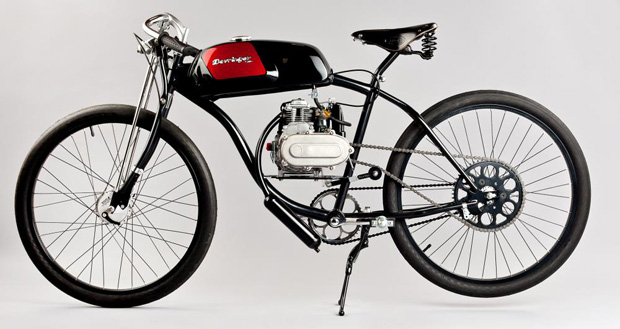 From time to time you stumble across something you really REALLY want. Not for any sound or logical reason. You just WANT it. Maybe it looks good, feels good or you just like the sound of it. Perhaps it’s always been a dream or a something your grandpa used to have when you were a kid.

Well this is one of those. A Derringer Custom Board Track Motorcycle, which basically adds up to just about everything written above.

Board Track racing was a very popular motorsport back in the day, particularly during the 1910s and 1920s. Racers would compete on oval circuits which were constructed from wooden planks (hence the name ‘board track racing’) The banked oval circuits were constructed from wood mainly because it was cost effective, but the downside was that they were tough to up-keep needing constant maintenance and often deteriorated after a few years.

The riders were amongst some of America’s first and bravest sporting superstars, riding stripped down racing machines designed for pure speed, adrenaline and no holds barred racing. Danger came hand in hand with this on-the-edge style of motor racing with deaths on the track common place.

The great depression of the 1930’s pretty much spelled the end for the Board Track ovals and the popular races, but thanks to Derringer Cycles, the bikes still live on today in all their modern glory.

Based in Santa Monica, California, Derringer Cycles build a modern interpretation of the original racing motorcycles, which are custom built to your own specification with no two exactly alike. Derringer uses a 49cc four-stroke engine with a centrifugal clutch, giving the Motorcycle plenty of torque and a more responsive and smoother ride than the early 2-stoke versions. With a moto-hybrid drivetrain the bikes can achieve a fuel economy of up to 100 miles per gallon. Now that is fuel efficiency!

The colorway possibilities and component configurations are endless, even down to the shape of the tank and the color of the saddle rivets on the gorgeous Brooks saddles.

Derringers Tag Line is “Made at the intersection of nostalgia and adrenaline.” Enough said.