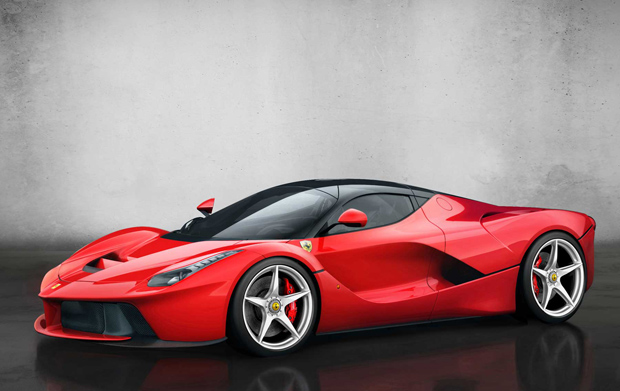 LaFerrari is the latest limited edition supercar built by the best in the business and every Italians favorite Ferrari. Officially unveiled at the 2013 Geneva Auto show LaFerrari follows on from the 1984 turbocharged GTO, the 1987 carbon fiber F40, the 1996 F50 and most recently the 2002 ‘Enzo’ Ferrari.

Keeping in the tradition of the Ferrari marketing philosophy that it makes exactly one car less than it thinks it will sell, only 499 of LaFerrari (or F70 as it’s also know) will be produced, usually only available to the very best Ferrari clients.

Similar to the McLaren P1 the LaFerrari is a hybrid utilizing F1 derived KERS technology with a mid rear mounted V12 6.3 liter engine producing a staggering 789 BHP with the KERS unit producing an extra 161 BHP provided in short bursts turning you into an instant F1 driver. Giving a combined BHP of 963 the LaFerrari goes from 0-62mph in a jaw dropping under 3.0 seconds and from 0-124mph in less than 7 seconds.

Unlike the P1 however LaFerrari is not a true hybrid as we know it, with the KERS only being used to mix the power together. Unlike the McLaren P1 that can be driven using the electric power alone with a pretty average range of 10 miles.

LaFerrari also beats it’s predecessor the Enzo around Ferrari’s private test circuit in Fiorano, Italy by a massive five seconds, recording a lap time of under 1min20secs, a record for any other road legal car Ferrari has ever produced. That’s pretty outstanding and above all, it looks BEAUTIFUL.

Unfortunately, even with a price tag of €1million, Ferrari has already sold all 499 of them before it was even launched! So we can’t buy one, but we can look at some pictures!