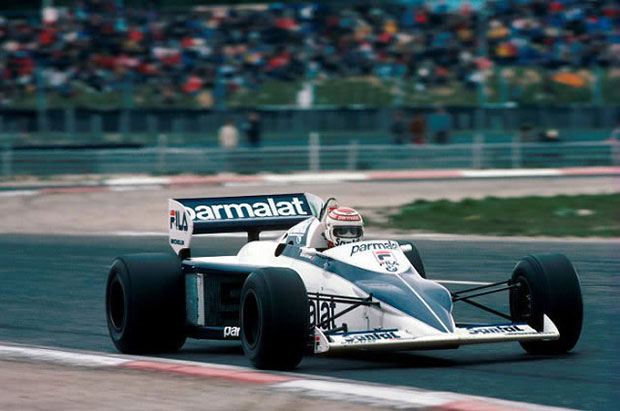 What an amazing treat to see Nelson Piquet reunited with his World Championship winning Brabham BMW BT52 at the 2013 Goodwood Festival of Speed.

When I was a kid I was very fortunate in that my father worked for the Brabham Formula One Team, back then the team was owned and run by F1 supremo Bernie Ecclestone and was enjoying one of its most successful periods.

The team had won the FIA Formula One World Drivers Championship 2 years earlier in 1981 with Nelson at the wheel of the BT49. So along came the 1983 season and after a very late pre season rule change banning the use of ground-effect side skirts, Gordon Murray was forced to design a whole new car in 3 months. With side pods now producing lift Murray’s solution was to angle and make them as small as possible, along with its massive rear wing the distinctive ‘dart’ shape was created. BMW by the end of the 1983 season were pushing up to 1500hp out of the tiny 1.5ltr Paul Rosche designed turbo charged engine and so the legendary BT52 was born, which after some mid season revisions (*more on that later) went on to win the 1983 season.

Back to me, well in 1983 I was 5 and when I saw my Dad on alternate weekends he would still have to work so would take me and my BMX to Motor Racing Developments’ (Brabham) Chessington factory. I would spend my time riding around the yard, ‘helping’ the engineers and sitting in pretending to drive formula one cars – the guys there were great, I could spin the steering wheel, flick switches, play with the gears, my only warning “don’t touch the big red button!!” (fire extinguisher) .

Having met and chatted, with (that child like innocence) to Nelson many times he was my absolute hero and the BT52 was and still is my all time favourite F1 car.

Mid way through the 1983 season Brabham introduced some major updates (for the British Grand Prix at Silverstone) and with it a change of colour scheme from blue on white to white on blue.

What that meant was my father was able to give me the white visor section which had been raced with it’s current Parmalat, Fila and BMW sponsors from round 3 at Paul Ricard in France through to round 8 at Circuit Gilles Villeneuve in Canada. The visor had been replaced with the now distinctive clear blue section you see on the car today.

Roll forward 30 years and I finally get to reunite with my 2 childhood heroes! To celebrate 30 years since becoming the first turbo engined car to win the FIA Formula One World Championship, BMW Group Classic have lovingly restored chassis no. 1 using the very latest F1 technology.

Along with the BT52 BMW Group Classic had restored a number of other legendary cars for the event, including the M1 Procar driven by none other than 6 time Grand Prix winner and Nelson’s 1983 team mate Riccardo Patrese.

Not only did I get to speak with the 3 time world champion, who along with Patrese kindly signed my treasured memorabilia, I got to see the man and machine drive up the hill, albeit somewhat tamely given that Nelson still struggles with his legs after his horrific 1992 accident at the Indianapolis 500 and with the immense power of the BMW being akin to a ‘light switch’ you can understand why Nelson treated the beautifully restored beast with respect. Still nonetheless Nelson wowed the crowds throughout the weekend and rekindled the boyhood memories of a 35 year old petrol head!