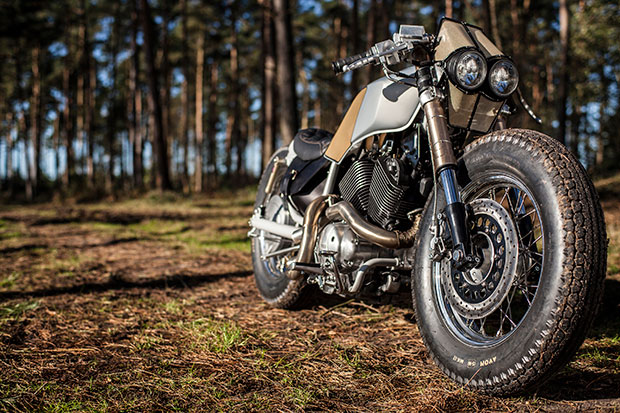 This is the latest build from King of Fuel favorite OEM (Old Empire Motorcycles) and named the Bulldog after a British Royal Air Force single-seat biplane fighter designed during the 1920’s which was noted for its strength due to its stocky design.

Using a 1998 Yamaha XV535 Virago as the donor motorcycle which Rafe and the OEM guys had “lying around” they cleared the decks and turned on the cutting discs to get started on what would be OEM’s seventh custom bike project.

Trying to find the right look for the Virago represented somewhat of a challenge for OEM as they quickly realised what a tough build this was going to be with limited time and budget and given that certain bikes often suit a certain type of look like the cafe/brat styles of older model Honda’s.

Favouring a short stocky and compact look, achieved by fitting a set of USD forks and replacing the wheels with 16’’ rims with Avon SM MK2 tyres on. The Bulldog takes on it’s own unique style, one that seems to suit it down to the ground. Quite literally.

Some nice OEM signature leather touches like the fuel tank covers/ side panels and all the grips and pegs bound in hand tooled leather were added and they also took the opportunity to fabricate up some beefy 2.5’’ stainless pipes with internal baffles to compliment the chunky look and stance of the bike. The usual high quality OEM aesthetic and paint job was left in the always capable hands of Black Shuck Kustom who produced the matt silver with gold mesh to get the contrast between the two textures and the scotching of all the aluminium.

King of Fuel has recently learned that another website favorite ODFU is working on a collaboration project with the guys at OEM, and given the creative talent in both camps we can’t wait to see what comes out the workshop doors!

You might also recognise the gloves featured in this photo shoot. Yep you got it, the 78 Speed Gloves from the 78 Motor Co, who are launching real soon! Register on their website for more info! www.78motorco.com