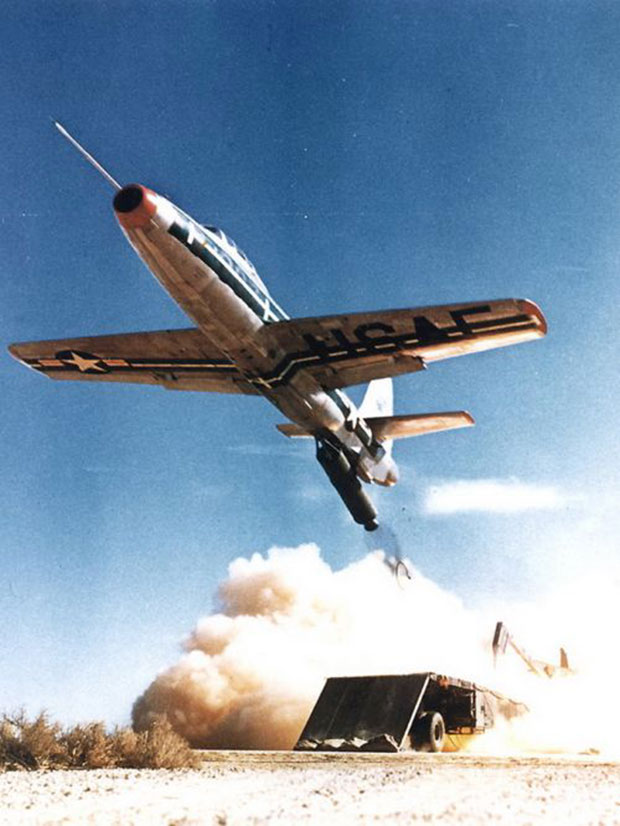 Zero Length Launch or ‘ZELL’ was a program created by the United States Air Force back in the early 1950’s to launch manned, nuclear aircraft from the back of trucks or out of concrete bunkers, completely negating the need for runways or vulnerable air fields.

The launch system relied on the use of powerful solid fuel rocket boosters attached to the aircraft that were then discarded soon after launch. Tests showed that once the rocket fuel had burnt out the aircraft had accelerated to a pretty staggering 175mph.

The first manned aircraft to be used in the program in 1955 was a modified Republic F-84 Thunderjet. A turbo jet fighter-bomber that was originally commissioned in 1944 and eventually introduced in 1947. Over 7,000 F-84’s were built and they quickly became the Air Force’s number one strike aircraft during the Korean War, flying over 80,000 missions.

Producing only 3.5G the ZELL launch was similar in the G-force experienced from using of Navy aircraft catapults meaning pilots could very easily take control aster launch using the normal jets to then continue the flight.

Check out the video to see them testing and lunching the Republic F-84 Thunderjet. Pretty amazing stuff!