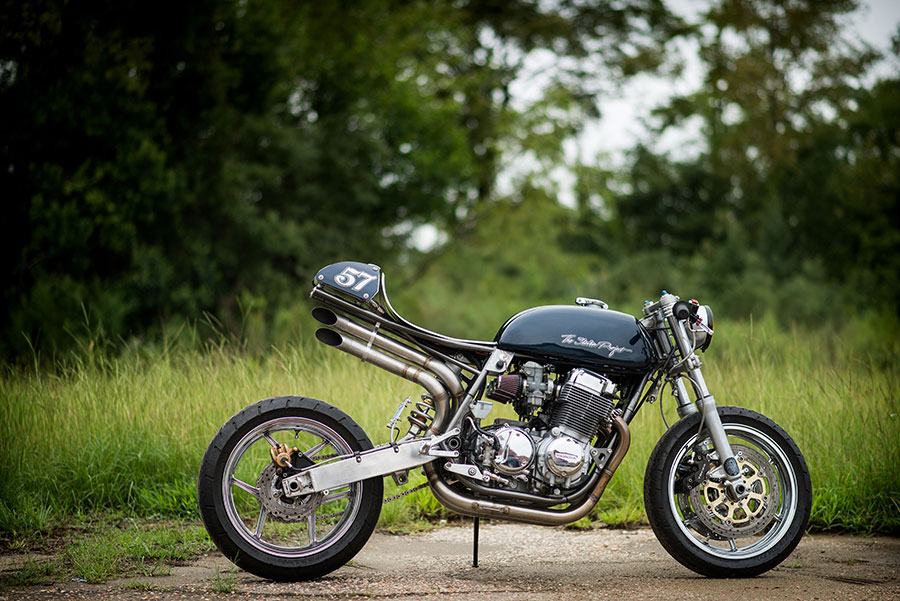 This is the The Steven Project by Hot Rod, Race Car and Bike builders TBCWorks based out in Fayetteville, NC.

Using a 1978 Honda CB750 that owner Tim Bradham found on Craigslist whilst looking for a quick bike to flip, the flip turned into something a whole lot more interesting and with a story that makes it one hell of an emotional project. Tim told KOF:

“One caught my eye, which was a ’78 CB750, after emailing the seller it turned out it was a good friend of mine (Dennis) that had the bike. When I went to look at, he told me that his brother Steven had ridden the bike for many years as his daily transportation. His brother had always wanted a Harley, so he bought one, only to be short lived by an accident that unfortunately took his life. After Dennis told me the story and tearing up… I told him I’d buy the bike, build it as a shop bike and as a tribute to his brother, I’d call it “The Steven Project”.

The project took around 12 months of on/off building and when complete was debuted at a local bike show the public and most importantly family to see. The family were of course in awe and couldn’t thank TBCWorks enough for all the hard work that they put into it.

“I just told them it was the right thing to do for a good friend and his brother!”

Built by Tim and Josh Cipra, some of the features include; an in-house fabricated frame, Antigravity 8 cell battery mounted under the gas tank, hand-made 4 into 2 stainless exhaust, seat pan, licence plate bracket and brake light and a pretty awesome in-house paint job by Robbie. Many of the new additions are from a Suzuki GSXR like the front-end and that distinctive rear swing arm and those slick looking wheels you might recognise from a Kawasaki ZX1000.

All in all, this is one very purposeful looking motorcycle, with a pretty emotional story to match. Looking forward to seeing some more projects from TBCWorks in 2015. Watch this space.