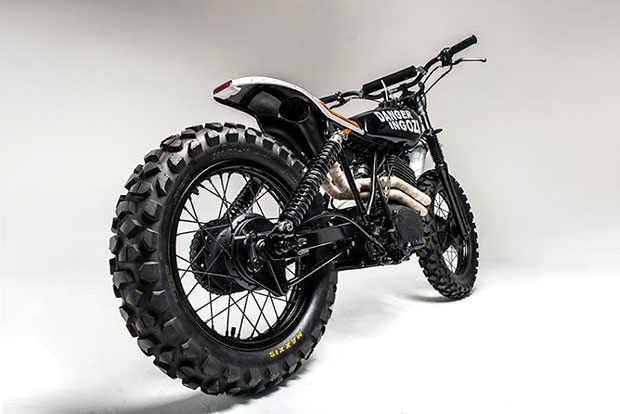 Blink and you might miss the modestly old-world storefront which houses a forbidding little bike shop and an intriguing local café. Hidden within the Bo-Kaap neighborhood of Cape Town, this custom bike shop is named Los Muertos (translation: The Dead) Motocycles.  And the Swart Gevaar Honda XL500 is one of their most notable designs.

This mean-looking and nostalgic machine began from a 1981 Honda XL500. It was completely stripped to the bones before being customized from front to back to give it the build of a street scrambler with enough power to take on the Kalahari SpeedWeek Race. Unfortunately, Los Muertos missed the event, giving them extra time to play around with the design even more.

The next modifications included stretching the bike frame to enhance the belligerence of this bastardly beast, in the words of Los Muertos owner, Craig Wessels. All plastic “bits and pieces” were wiped away, even including the gas tank which was replaced with a Yamaha XT250 option, repainted in an ominous, glossy black, and hand painted with menacing artwork by a local artist named David Brits.

The front tire was dropped to 18”, matching the rear, and Maxxis rubbers were installed to give the bike the ability to handle any curb, curve, or off-road terrain. The turn signals were relocated, a smaller headlamp included, and a new leather seat of a slimmer design was used to punch the monochromatic theme of the impressive Swart Gevaar Honda XL500.