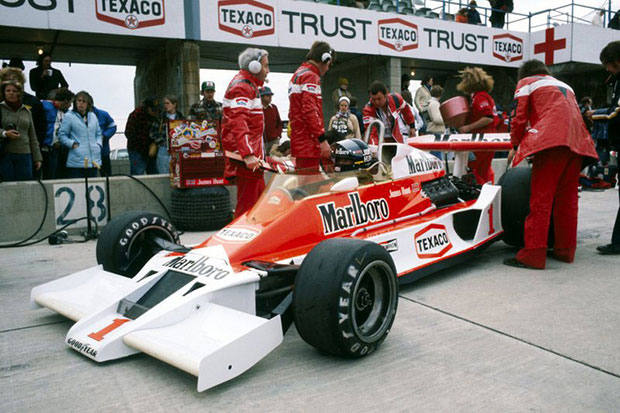 With the sound of 70’s F1 ‘still ringing in the ears’ after the successful release of Ron Howard’s Rush, what perfect timing for this amazing and very rare race winning F1 McLaren to come up for auction – not only that…. This McLaren M26 is the very car of James Hunt’s last ever F1 victory!

For those of you who that have seen Rush, which follows the story of James Hunt and Niki Lauda during their epic 1976 F1 battle, the car will seem very familiar as it is an evolution of the M23 – the car that featured took James to his first and only Formula One World Championship. Making its debut in 1976 initially the M26 was uncompetitive and for the remainder and the early part of the 1977 season McLaren actually turned to the then 4 year old M23 whilst development continued on the M26 with the help of Jochen Mass and James Hunt. By the end of 1977 Hunt had taken the car to 3 World Championship victories.

Chassis No.3 has been prepared and is available for sale exclusively by the RKMCCA Company. I think it looks amazing carrying Hunt’s championship winning No. 1 and emblazoned with the luminous Marlboro colours.

Interesting fact…. The Philip Morris company actually changed their colour scheme on F1 cars from the traditional red, white and black to the luminous orange you see here on Hunt’s F1 challenger – why, because it looked better for the cameras! Most noted in the finale of Rush (and in real life) the dark rain sodden 1976 Japanese Grand Prix in Fuji, watched worldwide and by millions of eager British F1 fans who had gotten up at 5am only to find out the race had been delayed by 2 hours due to the awful weather conditions. It must have been amazing to see the luminous James Hunt racing to his first and only Formula One World Championship. Marboro continued to change traditional colours of F1 cars, look at how the rosso red Ferrari’s changed in the late 90’s to reflect their deal as Marlboro Scuderia Ferrari.

The auction is set to run between 31st October and 3rd November and M26 is anticipated to reach between $1.2M to $1.8M. Take a look at the listing here