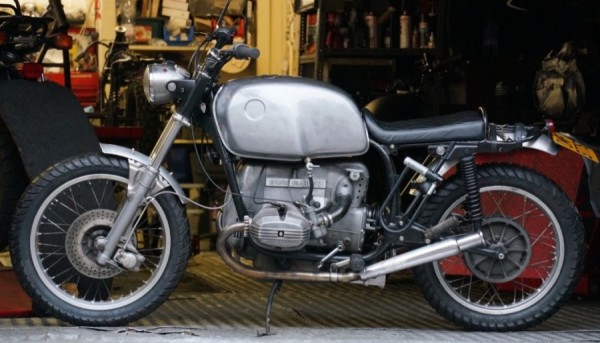 Our belief is that great custom builders are those that that can bring to life the values and passions of the buyer, confidently sweeping aside convention and the ‘rules’ that constrain creativity and individualism. In Untitled Motorcycles latest project they have built upon their heritage in BMW twins, and delivered a bike that reflects the desires and wishes of their client’s personal values – that the project be built using a make-do-and mend philosophy.

The bike, a BMW R60/7 had already undergone a poor first attempt to turn it into a café racer when it reached Untitled HQ, with faulty wiring held together with tape, poor engine setup and ill fitting parts from seat to handlebars. The easy choice would be to start again with a full strip down, sand blast, powder coat and addition of the ‘standard’ off the shelf new components, perfectly calibrated and ready for use.

The client however had other plans in store with a sole request that no new part be used in the development of the bike, even if this was at the cost of aesthetics and price, with the exceptions being safety and practical related items such as gaskets and oils. Some bike builders might of walked away, but the boys and girls at Untitled were not fazed, and by the looks of the photos have not been hindered in their ability to implement some lovely unique features.

For a start, the sub frame was remodelled to include a rear rack that can be accessed using a removable padded pillion seat. Scrap pieces of metal found in a waste bucket were used to construct the support beams for the rack and necessary mounting plates. The leather used in the construction of the seat was sourced from a leather jacket found in a second hand store. Other make-do-and-mend parts included pillion foot pegs and mounting brackets, front and rear guards which were recut, filled in and polished, brake light and indicators, grips and Renthal handlebars that were originally red in color. Even the braking was updated with replacement reservoir, and steel pipeline – you guessed it all second hand reconditioned.

Given the state of the original wiring, a second hand loom was sought, and connected into other used but tested components such as a police regulator, starter motor, and switches. The real crowning glory is the addition of an 1960’s Garelli headlight and speedometer taken from a scooter, which was hacked to work on 12V from 6V, absorb a neutral light and accept a BMW speedo cable. Alongside the stripped down tank, which was lacquered to avoid rusting, we also really rate the scooped custom quilt seat which is one we haven’t seen before.

Is this the most original looking and complicated bike to come out of Untitled, certainly not, but by ruthlessly pursuing the vision of the customer, they have shown what brilliant bike building is all about. 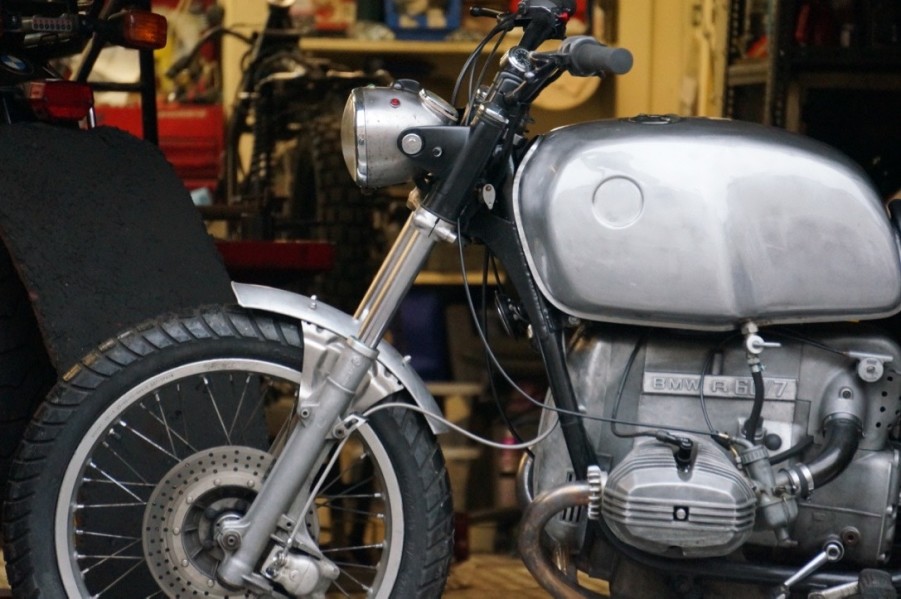 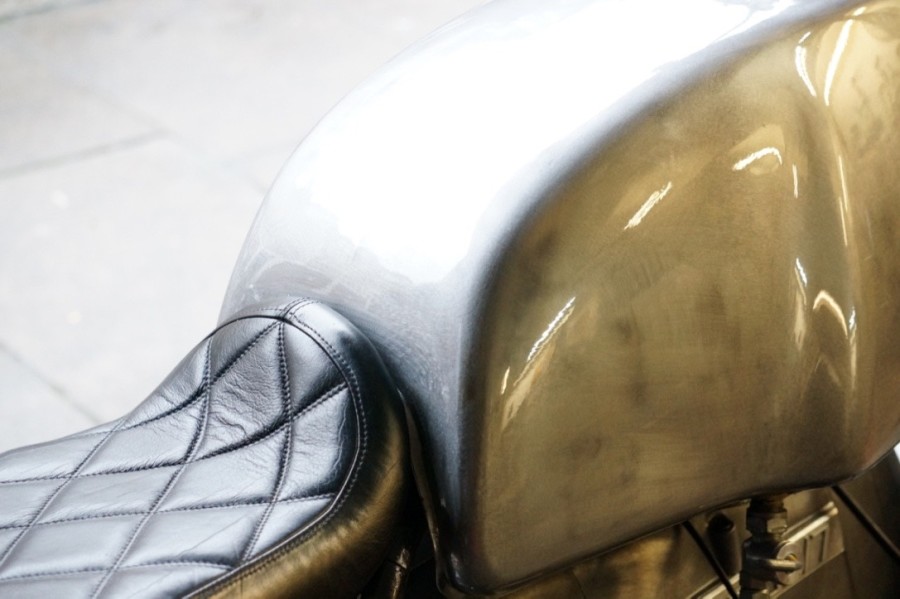 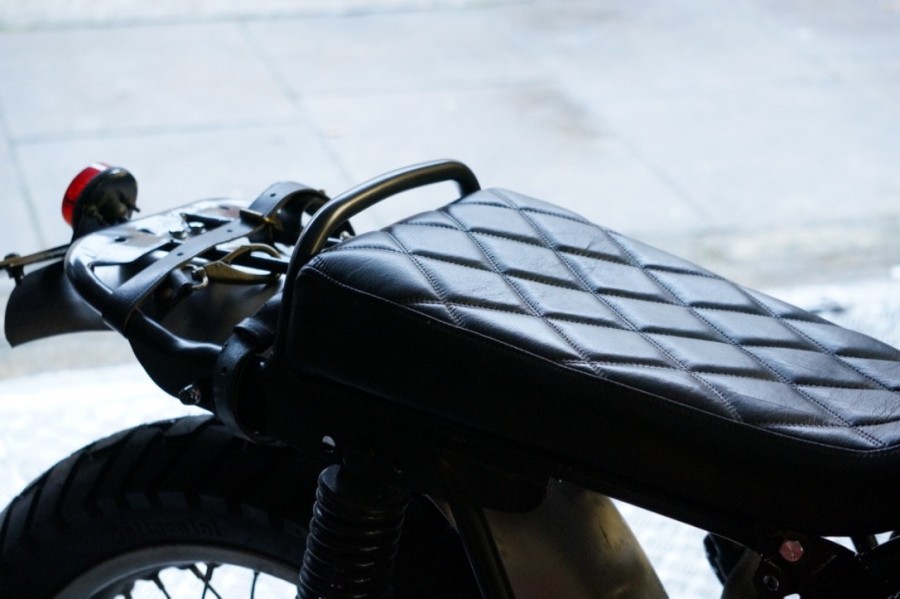 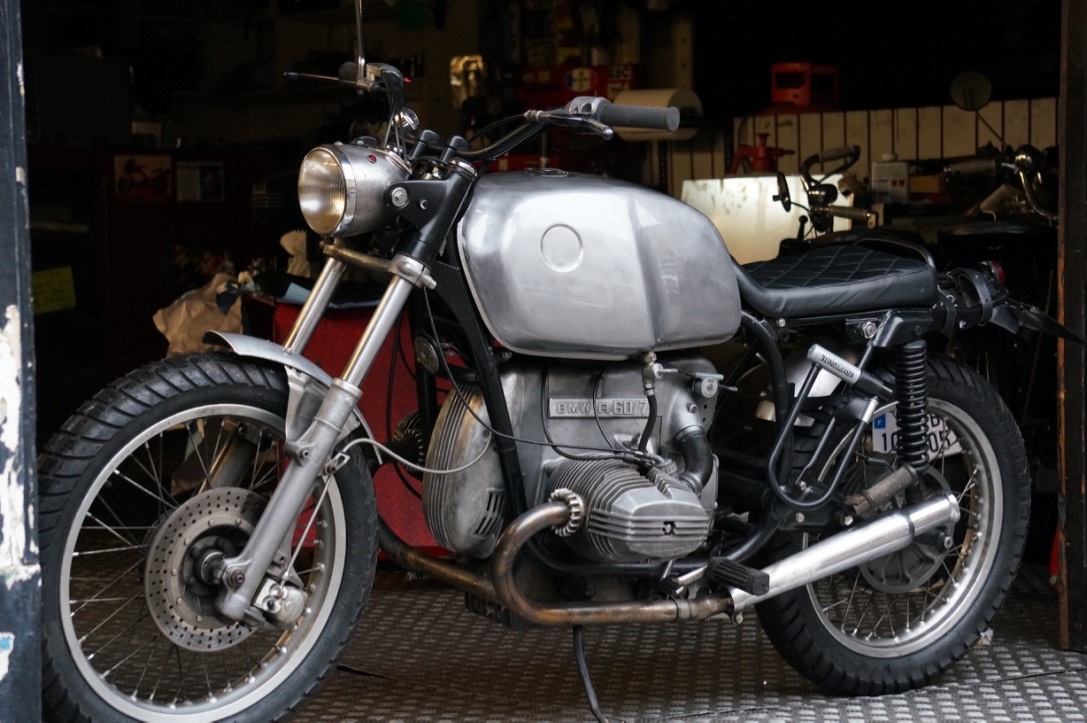