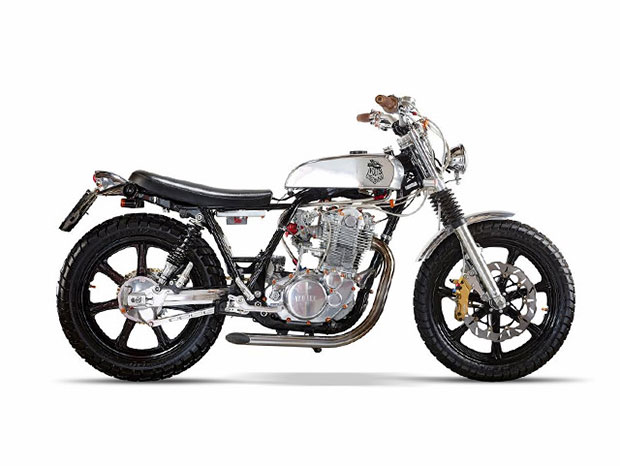 In 2011, the guys at Volts Mechanix were asked by an anonymous, unnamed client to take his 1979 Yamaha SR500 and customize it to the highest level. Of course, they jumped at the chance and got right down to business. The SR500 was completely stripped, and after 10 months of back-breaking work and a lot of remods and redesigns, the project was complete.

Nearly everything was rebuilt or replaced, from the renovation of the frame, completed with newly modified frame lugs, to the thorough cleaning and detailing of the engine. A new swing arm was fitted as well as new shocks, some RD wheels were restored and installed, all the brushes and bearings were replaced, a new electrical system was installed from end to end, and new braised hoses, control lines, and a carburetor were added to complement the new design.

The final detail was a special demand of the anonymous client with all the money. He wanted a special purple color paint with the words “Made in Japan” stenciled on the pantone crankcase. Since all of this work and money was being done in secret without the designers knowing the identity of the original owner, they began to wonder if this was a clue into the owner’s citizenship. The strange thing is that the Volts Mechanix bike was never picked up, even after spending enormous amounts of cash and time to perfect the design. To this day, no one knows who the man is.