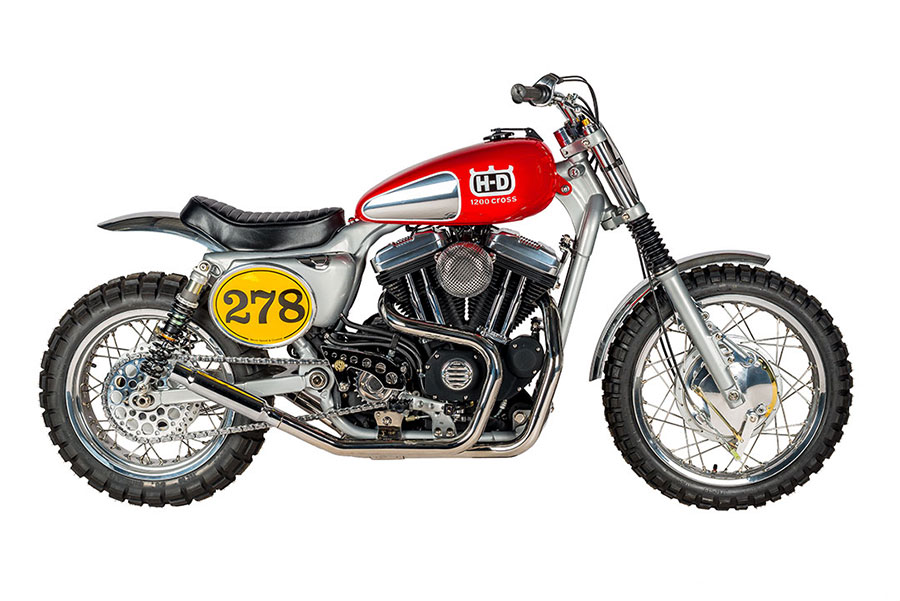 Ever since their World Championship win at Sturgis 2010 for the modified Harley Davidson class, Shaw Speed’s Custom division has powered on to create over 80 custom Harley’s – ‘Real’ customs too, not some quick fender changes and new stickers… Real full-on modified custom Harley Davidson’s like the new Bell & Ross theme bike we featured last week.

The XL1200 Cross is no exception and using a 2010 Harley Davidson Sportster Forty-Eight as the donor bike, takes influence from King of Cool, Steve McQueen’s 1964 Triumph TR6 motorcycle and his 1971 Husqvarna 400 Cross. A pretty impressive and difficult combination to get right, but it’s pretty clear that the team at Shaw Speed have smashed this brief right out of the park.

The bike was stripped to it’s frame and cleared of any brackets and mounts that were no longer needed and then the frame and forks were modified to keep the bike as minimal as possible. The XL1200 also has a day only MOT meaning no headlamp or turn signals were needed helping the bike maintain a ‘competition’ look and feel to it.

Ohlins rear shocks and enhanced suspension internals help provide the ride comfort while drum brakes were included to add the stopping power and where the cross touches the ground,  aluminum rims and stainless steel spokes were wrapped in Continental Twinduro tires.

To say the classic Husqvarna inspired paint job ‘pops’ is an understatement and the chrome detailing really does stand this apart as a bike I simply MUST have in my garage!