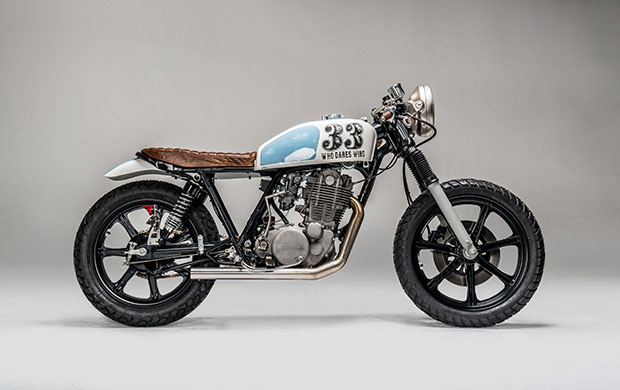 In the world of custom motorcycles it’s only every now and then that one jumps out at you as being really different. Not just interesting and individual, but really really different. I mean, how much can you actually add to a bike when you are essentially taking stuff away?  Surely we’ve seen it all now?

Well actually as it happens, it appears you can still produce a bike that makes a big impression, even to someone that writes about motorcycles for a living. Producing something like this is rarely down to luck, you simply can’t buy or teach style and when we stumble across a bike we like here at kingoffuel.com it usually comes from a stable full of them. In this case the stable of kick-ass bikes is the relatively new and awesomely named ‘Los Muertos Motorcycles’ (translated from Spanish as ‘The Dead’) based in Cape Town, South Africa.

Adopting a somewhat ‘Deus Customs’ approach to custom motorcycle building, the team at Los Muertos have integrated a coffee shop and an online store so you really can live and breath the experience, before, during and after you buy one of their custom bikes and presumably into the after life too if their name is anything to go by.

The bike that initially caught my attention is the stunning Yamaha SR500 ‘Who Dares Wins’.  The motto is taken from the Rhodesian S.A.S. (Special Air Service) an elite Special Forces unit formed back in 1951, and was used as a tribute to ex-SAS member Barry Koyd who worked on the bike along side the team at Los Muertos.

Steve Pitt explained to kingoffuel.com why they chose aYamaha SR500 as the donor bike “This build started out from a very clean and original ‘1981 SR 500 sourced locally. We chose the Yamaha SR500 as opposed to the somewhat over abundant XT’s floating around so as to be a little more individual.”

Individual is certainly what they delivered. Immediately the paint colour and tank art single this out as a very different build. Switching to the Honda 400/4 tank, also gave them a new canvas on which to paint. (I’m now really regretting selling my 400/4 tank recently.) The custom-made exhaust by Bill Steyn Engineering demonstrates that keeping it simple is more often than not the secret to success. Clip-on bars with hand wrapped leather grips, match perfectly with the vintage looking brown leather seat and the mini speedo keeps it all lean and mean up front.

‘Who Dares Wins’ is a phrase that has always resonated in the Los Muertos philosophy and personally for them, seemed to fit perfectly for this bike. Quite frankly, I don’t think I could agree any more with them on this: They dared, and they won.

To see more of the motorcycles from the team at Los Muertos, visit their website and online store here