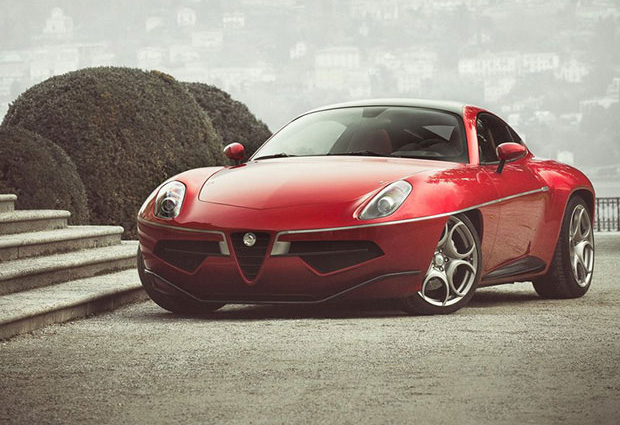 Last week we featured an article on the original 1950’s Alfa Romeo Disco Volante, but this week it’s out with the old and in with the new, because the ‘space ship’ is back!

It has been over 60 years since we first saw the Alfa Romeo Disco Volante unveiled, instantly deemed the “flying saucer” car of the early 1950’s. And now it’s back with an impressive new facelift, looking pretty darn good for her age. The new model was first introduced in the 2012 Geneva Motor Show, but unlike its ancestor, this one will not see the lanes of a racetrack.

The exterior design is constructed of hand formed aluminum with a rear portion boattail design, making this the preferred touring vehicle of true car enthusiasts and Alfa Romeo lovers around the world. Much like the original 1952 model, the newer upgrade boasts a front split grill and flat top fenders, but this newer model now comes with a V8 engine of 4.7 liters that was borrowed from the previous 8C Competizione version. This gets you a staggering 443 of horsepower on the rear wheels alone!

Also called the Touring Superleggera, this Alfa Romeo Disco Volante is only being sold to limited amounts of buyers, but this is a step up from the older model which was never made available by the then cash-strapped Alfa Romeo Corporation. The cool looking shrouded wheels in the front and the elegant pinstripe of chrome along the sides are nice little extras that really make this newer model stand out in the crowd, even if you don’t initially notice these intricate details.

This 2- seater vehicle is more lightweight than its predecessor, enhancing its reputation as the “flying saucer of a vehicle” for our generation.