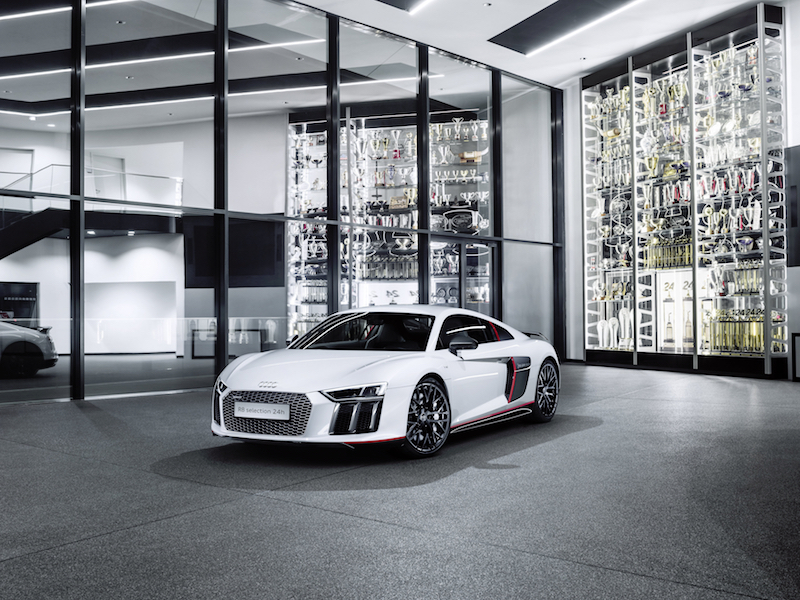 The second generation of Audi’s R8 supercar has won the hearts of those wanting the ultimate in performance on their driveway. This is as well as those race fans that follow the brand at the race track, as a very special edition will soon be celebrating the Ingolstadt marque’s successes in endurance racing.

The moniker R8 was used by Audi Sport when the brand first went sportscar racing, and its DNA has helped Audi parlay its various technologies into their road cars.

But this car has made an instant impact, having won the Nurburgring 24 Hours on its very first attempt at a 24-hour race on May 10th, 2015. So from May 10th this year, expect the “selection 24h” to sell out very quickly.

A limited run of 24 cars on this model, provides the most exclusive car to built by such a manufacturer in recent time. Based on the R8 V10 Plus, the “selection 24h” is a tribute to the Audi Sport customer racing program, which has been active since the first generation went racing back in 2009.

With 323 wins both nationally and internationally, the GT3 edition of the car continues to be a powerhouse in the this particular category, despite the competition getting bigger and better every season.

The V10 Plus was always going to feature heavily on the racetrack, thanks to the close cooperation of race car engineers, motorsport specialists and developers, which has allowed for the car to be released for purchase in both guises.

The car has many bespoke touches, which includes gloss-finish carbon fibre on the front spoiler, rear diffuser, mirror covers, engine cover and the rear wing, along with gloss anthracite black 20-inch aluminium-forged wheels. It also has a tricolour paint scheme, with Suzuka Grey as the base colour, couple with some black and red highlights, paying homage to its GT3 LMS cousin.

This very special edition will be a modern classic, the minute that it’s quattro-powermd four wheels touch the tarmac, come rain or shine. And the feeling behind the wheel will put a big smile on the face of the person driving. “Vorsprung Durch Technic” in full effect…..