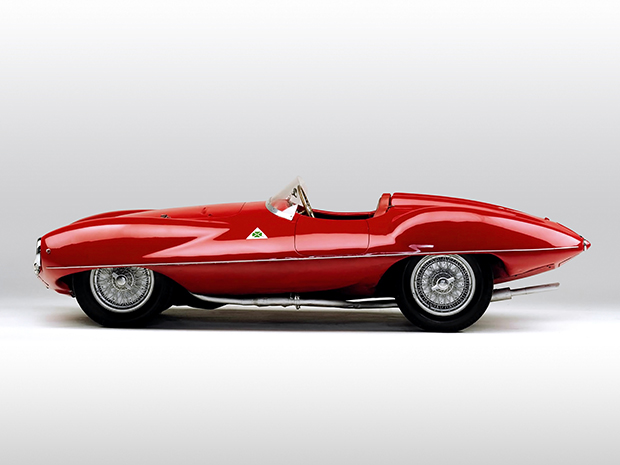 The impressive styling of the Alfa Romeo – Disco Volante Classic is a pretty remarkable achievement for a 1952 automobile. Its curvaceous exterior provided this awe-inspiring vehicle with an extremely low drag coefficient, even less than the 2012 Tesla Model S.  Not bad for a post World War II aluminum design that could reach speeds in excess of 140 mph.

Because of its high speed capacities and its head-turning curves , Italian insiders nicknamed it the “Disco Volante”, meaning “flying saucer”.  This was a time in America of the famous Roswell Incident and all of those terrible 1950’s movies of space aliens and Martian invaders.  So, the name caught on and led to an even higher brand name recognition among car enthusiasts. Of course, the cockpit design also added to this nickname. It was so cramped that you almost had to be from another world just to fit inside and drive the Disco Volante Classic in the first place.

The car went through a series of redesigns, but Alfa Romeo was very cash poor at the time. It was entered in a few races in the early 1950’s, but without much fanfare. The car was entered in the 1952 Formula 1 World Championship after Romeo’s previous win with another design the previous year. But money was tight, and they withdrew from the competition.

Often mistaken for a Jaguar E-Type Model, this automobile is revered more for its awesome profile than for its usefulness or agility on the road or racetrack.

And guess what. It’s making a come back. Keep and eye out for our feature on the new Alfa Romeo – Disco Volante very soon!