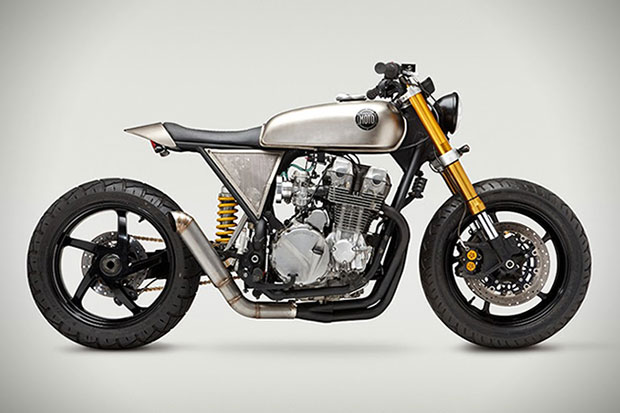 John Ryland of Classified Moto was so busy in 2013 that he actually had to stop taking orders for his masterpiece designs like the Classified Moto Honda Nighthawk. This modified 1992 Honda, known as a CB750 to bikers outside of the United States, was initially built for a fighter pilot in the Middle East. Oddly enough, after seeing a similar Ryland design while visiting The Bikers Café in the middle of Dubai, the pilot wanted something along the same lines yet vastly unique.

Ryland and the pilot settled on a design that exhibited a more “street tracker” vibe. As a result, the Nighthawk has a much higher seat than normal with a narrow tank and a smaller cockpit. The handlebars are upright and a twin intake setup was chosen as a compromise between a massive stock airbox and a slimmer aluminum option.

Each bike is built by Ryland’s team to individual specification and classifications chosen by the buyer in accordance with the design team. This makes the final price of the Classified Moto Honda Nighthawk somewhat wide-ranging, usually falling between $7,500 and $17,000 USD.