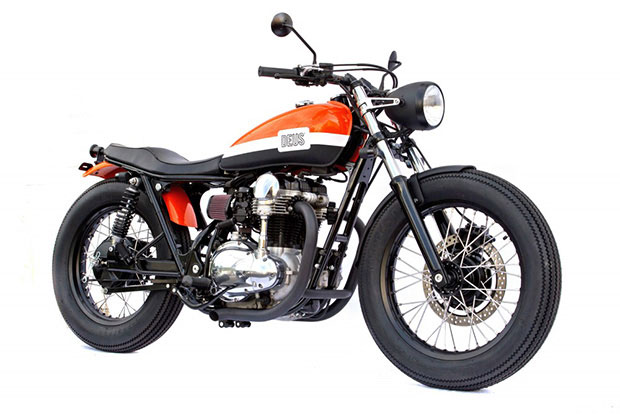 Moto GP Star Randy De Puniet has always been a big fan of the movie “The French Connection”, the 1971 classic film starring Academy Award winning actor, Gene Hackman, as a rough and tough narcotics detective cleaning up the mean streets of New York. De Puniet is such an avid enthusiast of the movie that he asked Deus Ex Machina head tech Jeremy Tagand to design a French Connection inspired Deus Custom motorcycle for his own personal use to tour the city streets of Sydney, Australia.

The brief was pretty straightforward with Randy initially wanting a 2-up twin middleweight that will handle well in the city and still be powerful enough for the open road. De Puniet also requested that the finished bike be black, white and orange.

The Deus team certainly delivered, using a Kawasaki W650 donor motorcycle, painting the hubs and rims in black and lowering the bike in both the front and the back ends. An SR500 tank was placed snuggly in the front center portion and vintage headlights were added to give it “The French Connection” appeal of 1971.  Fork legs were swapped and the caliper was thrown to the other side to add to the “old school” feel. The final touch was a set of Firestones Deluxe Classic tires, creating a bike that Hackman’s character Jimmy ‘Popeye’ Doyle would be proud to ride.

Visit the Deus Customs website here to see more of their amazing creations!

The video below is really worth a watch if you are interested to know what goes on behind the scenes in the Venice, California Deus Customs shop! Interviews with Stefan Wigad the Brand Manager of Deus, and Mike Wollaway their Custom Bike Builder!