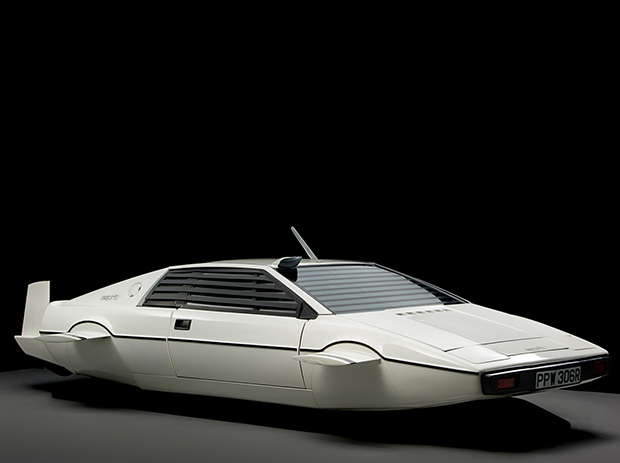 The 007 Lotus Esprit ‘Submarine Car’  is perhaps the single most iconic automobile in movie history.  Featured in the 1977 James Bond flick, “The Spy Who Loved Me”, this is the only vehicle ever manufactured that drives like a speed demon but also transforms into a fully functional underwater submarine.

The basic concept of the original wedge-shaped Lotus Esprit was first released in 1972 at the Turin Motor Show, based on an elongated chassis design of the Lotus Europa. It was an instant sensation with its “folded paper” polygonal silhouette. The press went crazy, and so did film producer Albert “Cubby” Broccoli. He accidentally stumbled upon a pre-production model of the new Esprit, sitting in front of his London Movie Studio.

Perhaps the word “accidentally” is a bit premature.  The elite automobile was actually purposefully placed in this strategic location by Don McLaughlin, the Public Relations Manager of Lotus.   It seems that he had heard a rumor that the new James Bond Production was in need of a futuristic spy car that would re-energize the flailing movie franchise.

What better way to gain worldwide exposure for both the movie and the car than to have his company’s newest Lotus model appear in the Big Budget Motion Picture as the new 007 Lotus Esprit ‘Submarine Car’.

And the car was actually used as a real submarine.  This was long before the days of trick photography, so the Lotus performed as required, aside from the fantasized missile launchers and the smoke screen rear exhaust.  From the time that the automobile resurfaced from below the depths of the ocean waters, its new name was “Wet Nelly”.  She went into hiding for some 10 years, inside a storage facility, until she was once again discovered in 1989.  Now touring the globe as the quintessential James Bond Vehicle, the 007 Lotus Esprit ‘Submarine Car’ is perhaps the most revered vehicle of all time.