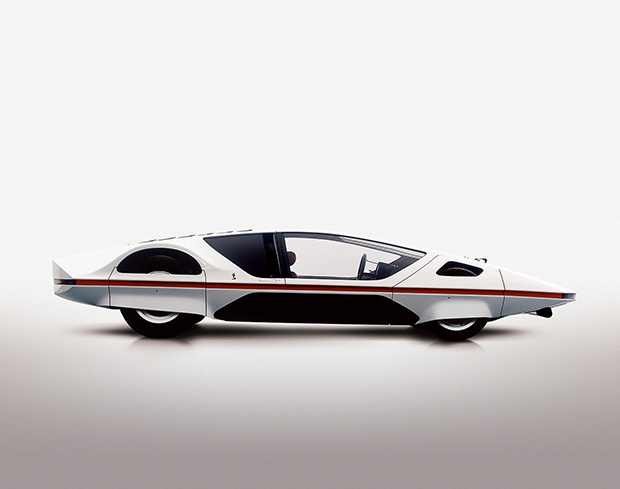 The stunning Ferrari Modulo was a unique concept Ferrari by Italian designer Paolo Martin who first presented this awesome ‘other-worldly’ design in 1970 at the Geneva Motor Show. In the 1960’s, Ferrari had constructed a collection of 25 different styles of racing car chassis to be used in mid-engine high-powered race cars.  They were unable to sell or race all of these models, so the 23rd design in the series was given to Paolo’s company, Museo Pininfarina, for this futuristic design project.

The result was both impressive and somewhat unrealistic.  The Modulo had wheels that were nearly completely covered by the bodywork, and the vehicle sat severely low to the ground.  This combination of design elements left the Ferrari Modulo nearly paralyzed for travel.  The front wheels could only turn in very slight degree increments, resulting in a dream car that the owner could only drive essentially straightforward and the low elevation of the vehicle limited the terrains on which it could travel without damaging the undercarriage.

Like many of the past and still some present Ferrari’s, you also need to be a very ‘uniquely proportioned’ individual in order to ride in it comfortably and to operate its controls and pedals effectively.

However the Ferrari Modulo did have some state-of-the-art advancements for its time.  Take for example, the Ferrari Modulo did not have your traditional Ferrari doors. The top canopy actually slid forward over the top of the hood in order for the driver to gain entry.  It also had a unique spherical control device inside that located all of the mechanical controls and a headlight design that would be incorporated into other future Ferrari models.  The car went on to win multiple awards and is still considered one of the most remarkable collaborative efforts on record.

I’m sure we all imagined a day as kids when all cars would look like this. I know I did. I wonder if there are any more prototypes like this coming out of Maranello anytime soon?